The words of men and the universe of minds … 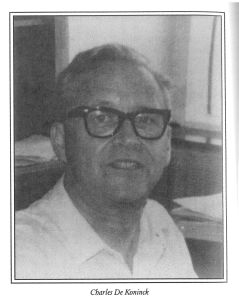 Photo from Vol. II.3 of collected works, published by PUL.

Yesterday, I finished revising my dissertation on the natural philosophy of Charles De Koninck. Only the faculty reader-requested comments remain. Deo gratias!

In related events, the newest edition of De Koninck’s Oeuvres published by Laval Press arrived today. In the book, it was striking to discover a photo of the man that I had never seen before (reproduced above). This newness called to mind some things (some rather obvious): I will never meet him this side of the grave; I’ve spent a significant portion of my life studying his work in philosophy and the work of those minds that he in turn, studied; what I do know of this man I know only indirectly, through the ideas he attempted to put down on paper.

The object as object acquires no perfection from the simple fact that it is held secret. Even though one reveals it to another, it would not be for all that illuminating. Not all speech (locutio) is enlightening (illuminatio). “The revealing of things which depend on the will of the knower cannot be called illumination but only talk; for example, when one person tells another, ‘I want to learn this, I want to do that, etc.’ The reason for this is that the created will is not light, nor the measure of truth, but it participates in the light; that is why to communicate things which depend on the created will does not, as such, illumine. In fact, it does not pertain to the perfection of my intelligence to know what you want or what you understand, but only what is the truth of the thing.” Because the divine will alone is the measure of truth, it is only divine talk that is always enlightening. (The Primacy of the Common Good, Writings: Vol. 2, 96)

De Koninck quotes St. Thomas, ST, Ia, q. 107, a. 2, c. Here, St. Thomas is considering how one angel speaks to another (a higher to a lower, or a lower to a higher). The Angelic Doctor distinguishes between enlightenment (illuminatio) and speech (locutio). Perhaps we can compare this, in our human discourse, to a meaningful conversation over and against “mere talk.” Speech is “mere talk” when it only reveals our desires or aims apart from the common rule of truth—precisely insofar as it proceeds from me it does not bear the mark of the Primal Truth and is not enlightening (the private good of my own spoken words is enlightening truth only when it shares in the common good measured by God): “For to know what you may will, or what you may understand does not belong to the perfection of my intellect; but only to know the truth in reality.” (St. Thomas, ibid.) As speakers, we are perfected only when we speak in unison with and imitation of the Primal Word. Thus we must avoid vain talk or godless chatter (see Eph 4:29–32, 5:4; 2 Tim 2:16).

In a similar vein, St. Thomas teaches us (Super Ioannem, VII, Lectio VII, n. 1040) that all who speak from themselves are liars. (As De Koninck points out in Principle of the New Order, ibid., 117, if sheer will entirely precedes thought, we only eliminate ourselves from the order of truth: “The liberty of speech is discovered, speech freed from intelligence. The ‘external utterance’ is emancipated. Thought is made subject to language. In the beginning, the word of man. ‘I say unto you, on the day of judgment, men will give an account of every vain word that they have spoken. For you will be justified by your words and you will be condemned by your words.'” [Mt 12:36–37])

Thus illumination (based upon the angelic intellect’s grasp of the truth) in the proper sense can only pass from higher to lower, while speech (based upon one angel revealing its will to another) can proceed from either higher to lower or lower to higher.

Because human beings are all on a par—we all possess the same nature—we only imitate the angels in a distant way in this respect. Their universe of pure intellects is strictly hierarchical; our cosmos, with its materiality and the organic structures upon which our minds and hearts depend as conditions, levels into a sometimes uneasy dynamism the spiritual stasis-in-activity of the angelic order. One human mind, over time, may never achieve the ability to illuminate another human mind. A younger mind may illuminate an older mind. Some old minds are only full of “mere talk,” and it is rare for a young mind to illuminate even his peers.

Yet, in statu viae, we do imitate the angelic hierarchy of illumination in the relationship of teacher to student, master to disciple. One mind strives to pass on to another—in the mode of illuminatio—what it has grasped by being measured by truth. The angels, existing apart from time, need not study history to learn what their brighter brothers know connaturally. Men, by nature historical animals (and historical because animal—organic and material), must comb the past and its records for help from the past luminaries. Yet the human mind may take searching this “dustbin of history” for the science itself; the bibliographical quisquillia and indigestible knowledge stones that Nietzsche condemns are perhaps better thought of as “mere talk” from the past that we must carefully discern. Indeed, if Nietzsche proves anything in his discourse on the advantage and disadvantage of the study of history, it is to show us that the force of a living (present) mind alters where it alteration finds and bends to remove and reshape the past into its own artistic product of the now. (His error comes by taking this to be the whole account of truth in all its possibility.)

This indicates that the historical word (written or spoken) necessarily pales in comparison to the present word (spoken in dialogue with another); the act of philosophy cannot be a long-distance relationship with now-disembodied minds. The human mind, a shade-intelligence, turning outward to find the truth, finds the going hard. The immanent, interior activity of contemplating the truth, then, since it cannot be perfected precisely as an act by someone from history or by another human in the present, necessarily must turn to a source above history and a hope for a vision of the Truth that encompasses all times. —Or, we must turn to that Truth coming down to us; the people who walk in darkness have seen a great light; the Primal Truth has broken into our history by taking our own nature.

Thus, now in this universe of minds, in the beauty we see when finding the truth from another human mind, as in my case with Charles De Koninck, we can say that we see the face of Christ in another’s words. This spiritual work of mercy from mind to mind, teaching and illumination in human words and human flesh, takes its nobility and perfection when formed by the Truth of the Word made Flesh.