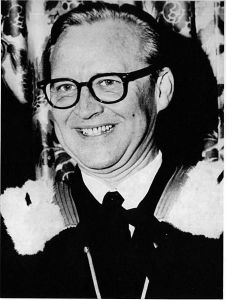 The Cosmos is De Koninck’s unfinished monograph proposing a Thomistic understanding of evolution. De Koninck divides his work into three parts: a scientific consideration of the cosmos, a philosophical consideration, and a theological consideration (where the work ends unfinished). The basic thesis of the work is that the raison d’être of the cosmos is the human species. De Koninck distinguishes “the cosmos”—the ordered whole of physical reality—from “the universe” as a whole, which contains, besides the cosmos, other essentially distinct angelic universes, all of which make up the created universe in its completeness.⁠1 Now, the notion of “cosmos” upon which De Koninck relies is key. He claims that “God could not create a cosmos which was not essentially ordered to an intra-cosmic intelligence.”⁠2 This statement is correlative to the conclusion of De Koninck’s futility argument if it is phrased from the perspective of God’s creative activity. The actual argument to be examined works only with certain assumptions about the nature of a possible cosmos.

The argument makes three central assumptions. First, it assumes hylomorphism: that primary matter and substantial form are principles of the being and changes of physical substances (i.e., physical or natural objects, whether they change as to their properties or as to their substance, i.e., their identity as an object).⁠3 Second, it assumes various notions about primary matter: that it is the purely indeterminate capacity for all distinct kinds of substantial existence, that it is the material origin of all physical objects, and that when a physical substance comes to be it is an innovation of a being but not a creation ex nihilo.⁠4 Lastly, De Koninck considers a possible cosmos consisting only of non-living, material objects that possesses a beginning in time: the initial material composite.⁠5

The support for premise (1) relies upon the nature of matter, motion, and infinity that are implicit in De Koninck’s assumptions about matter. It reasons modus tollens. Given a possible cosmos composed only of inorganic physical objects, such a cosmos would consists entirely of mobile beings, objects whose existences can be manifested only in the existence of motion. Yet if mobile beings existed only in order to have the existence found in motion, “their reason for being would be impossible: their existence would even be contradictory.”⁠7 This is because a sheer material multitude is unrealizable as an end, because it tends of its nature to the infinite. Thus, if a purely material cosmos of mobile beings were all that existed, the cosmos would be self-contradictory—a being that sought perfection in a terminus both imperfect and interminable.

One could object to this argument that it appears to commit the fallacy of composition: it claims to infer from the futility of the motion of one material being to the futility of the motion of the totality of such beings. Here, De Koninck must be read as making the assumption that the individual mobile beings under discussion can only exist as part of a cosmic order, that is, an order where individual objects and their interactions do not come about entirely by chance and accidentally but by nature and essentially, or in virtue of what they are.⁠8 If, as an essentially ordered whole, all mobile beings were for the sake of an unrealizable end, then that ordered whole would exist in vain.

One could also object to this argument by saying that the claimed necessary “rest” or “immobility” in a terminus need not be in a kind of being (i.e., a substance or object), but it could be merely an accidental being or property. However, De Koninck means to include both accidental changes and substantial changes in his argument, as is clear from his assumptions. Thus, the claim is that changes in the category of substance cannot be only for the sake of the generation and destruction of more and more physical objects: the generation of a finite set of permanent beings must be its aim.⁠9

Now, (b) is true by definition, while (a) should be more closely examined. Again, De Koninck seems to be assuming that the cosmos is something that is essentially unified. It is not one substance, but it does possess a unity of order that makes it one.⁠11 Consequently, its order must be complete (lacking none of its proper parts) if it is to exist as the kind of thing that it is.⁠12 This completion would be interior to the cosmos only if it were something achieved within the order of the cosmos as one of the parts of that order. A pure spirit, entirely lacking prime matter, could not be a member of such an order. It would be extrinsic to such an order or trans-cosmic.

Thus, assuming that this being that is at once immobile and cosmic is the human being, the end of all mobile cosmic being is the human being: “Man is manifestly the raison d’être of the whole of nature.”⁠13 The unmentioned assumption upon which De Koninck relies is that this being’s immobility must be a form of intellectuality. This connection must be defended in order for the futility argument to carry the day.

1 See De Koninck, Cosmos, 320 (McInerny edition): ““The inorganic world and the human species are alone part of the ultimate perfection of our cosmos. But their specific difference is not sufficiently profound to be of the essence of the universe. In corporeity they have a common natural genus. It is this insufficiency of unity of essential order that enables St. Thomas to formulate an argument for the existence of the angels who are specifically different from one another and exist outside any natural genus. Our cosmic universe is only the bottom rung of the whole of creation, of the universe in the full sense, where a pure and essential unity of order reigns. Like an isolated angelic species, our whole cosmos is only a degree, the lowest, of the universal hierarchy. It is only in the ensemble of the created universe, that is, in the ensemble constituted by all the specific universes that are the angels and the cosmos, that we find that pure hierarchy which is of the very essence of the work of God.”

2 Ibid., 295. In n. 101, De Koninck argues, following Billuart, that what is abstractly within the realm of God’s power is not necessarily consonant with God’s wisdom.

3 See ibid., 259–61. Contemporary defenses of hylomorphism as well as the reality of substantial change can be found in Connell, Oderberg, Feser, Madden, and Brouwer.

5 See ibid., 262–63, and 284 for the name “initial material composite.” Note that the notion of an absolute beginning in time is not necessary for the argument.

8 This seems warranted by ibid., 257: “By the term ‘nature,’ taken in a general sense, we mean the coordinated ensemble of spatio-temporal things which surround us and of which we are a part.”

9 One could further claim that there is an equivocation on “immobile” at work in the argument. This merits further consideration.