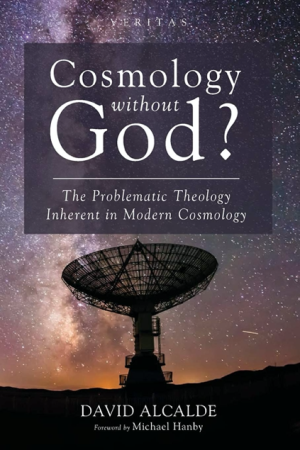 Over at Thomistica is my review of Fr. David Alcalde’s Cosmology Without God? Here’s a brief excerpt:

In his monograph, Cosmology Without God? The Problematic Theology Inherent in Modern Cosmology—a revised version of his doctoral dissertation written under Michael Hanby at the Pontifical John Paul II Institute for Studies on Marriage and Family at the Catholic University of America—Fr. David Alcalde pronounces a harsh sentence on the cogency of much contemporary science-religion dialogue, in particular in the domain of theological claims made in virtue of the hypotheses, theories, or conclusions of modern cosmology. This negative critique is, in large part, deserved, since “the underlying religious interpretation of reality is taken no longer as universally valid but as a matter of private preference, if not as superstition” (Alcalde 2019, p. 5, fn. 10, quoting Wolfhart Pannenberg). . . .

Fr. Alcalde’s book consists of three main parts. The first chapter, “The Problem of Theological Extrinsicism in Modern Science,” considers what this “extrinsicism” itself is. Alcalde claims that it is generally present in modern science due to its theological, metaphysical, and methodological priors. This extrinsicism is theological, that is, it is “the deficient theological understanding that conceives of God as an external agent who is in competition with natural processes and of creation as a worldly mechanism” (Alcalde 2019, p. 9). Thus, it is an element of “extrinsicism” in general, an idea that Alcalde takes from Michael Hanby: “Modern science claims that ‘science, metaphysics, and theology are essentially ‘outside’ of each other, where their relationship and their respective claims can be adjudicated from the neutral standpoint afforded by the empirical and experimental methods of science.’” (Alcalde 2019, 9–10, quoting Hanby, No God, No Science? p. 3).