In his Cursus Philosophicus, John of St. Thomas considers the final six predicaments or categories in the second part of his Logic, and in q. 19, a. 3, he turns to ubi or “where,” the category that seems to add some being to locus or “place” as a type of quantity. The nub of the issue is whether ubi is an extrinsic or intrinsic mode of a placed thing.

His consideration proposes two thought experiments. The first is, were you to place two men in a vacuum, how could you account for the fact that there is still distance between them?

The second is, were the universe to consist only of a moving stone, how could we account for its motion, or acquiring new places? He even notes that, in such a situation (late medieval knowledge of combustion aside) fire would not heat anything, for there would be no circumscriptive body to be acted upon. This squares with John’s eventual solution, that having ubi or having ‘a where’ in the natural order resolves to the existence of interacting substances. 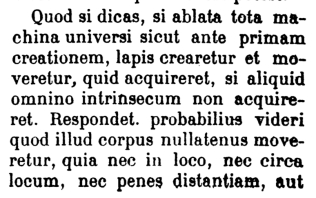 The second thought experiment in particular is interesting. (The opening lines are also striking: “If you were to stipulate that the whole frame of the universe [machina universi] be removed just as before the first creation of things, and a stone were created and set in motion, what would it acquire, if it did not acquire something wholly intrinsic?”) It reminds one of Newton’s thought experiment—with two identical globes yoked together in sheer absolute space, in which one tries to discover the existence of absolute motion—given at the outset of the Principia. (John’s Cursus antedates the Principia by a few decades at the least; John was a contemporary of Descartes and died in 1644).

This issue revolves around the fundamental idea about being somewhere in Aristotelian physics. To be somewhere is to be contained by a place. In a vacuum or void, there is apparently no containing body, but distance still exists. This explains John’s solution, since he says of the stone that “it seems more probable that it would by no means move, because it is neither in place [viz., contained by a body] nor about place, nor does distance or nearness belong to it with respect to something else, because there is no other thing . . . .” Again, near the end of his consideration, he says that:

But if local motion were to exist in a vacuum, it would be imperfect and would acquire ‘a where’ qualifiedly and not simply speaking, but rather a mode of distance of presence, which is a condition of [having] ‘a where’. If there were no other bodies which it could be present to or distant from, it would not acquire anything.

On the one hand, John’s second thought experiment has Machian overtones: for the Machian, inertial motion is defined with respect to other bodies in the universe. In this view, Newton’s thought experiment with the globes is “an entirely groundless speculation” (Dainton, Time and Space, 191) because the experiment has never been done, and indeed, could never be carried out. The Machian proposes instead:

The distinction between inertial and non-inertial (accelerated) motion must be grounded in the overall arrangement of matter in the universe. It is because matter is configured in a certain way that certain paths are inertial and others are not. [Mach’s] one concrete proposal is that inertial forces are produced when a body accelerates with respect to the centre of gravity of the entire universe. By what mechanism, though, and why? Presumably, there must be something akin to a force that links all bodies in the universe, and that is responsible for their moving as they do. (ibid., 192)

In this sense, John’s Thomistic leanings assimilate his views to a relationist in the debates about the existence of space. On the other hand, his views about the possibility of the vacuum (or at least its logical possibility) seem to tilt the scales towards something substantival. Indeed, for the Aristotelian-Thomist—according to whom the universe is composed of substances (“For if the totality of things [τὸ πᾶν] is a kind of whole, substance is its first part,” Metaphysics, 1069a19–20)—“being somewhere” is not a meaningful category in the (per impossibile) absence of other substances in the universe. Perhaps this position is in some way prior to the debate between substantivalists and relationalists.

View all posts by John Brungardt

2 thoughts on “Two medieval thought experiments in a vacuum”