Home › Philosophy of Nature › Cosmology › Ah, to Live in a Cosmos Again!

Ah, to Live in a Cosmos Again! 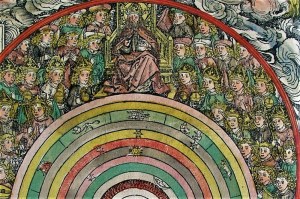 The folks over at Church Life Journal at the University of Notre Dame are publishing a special series during September on the relationship between science and religion. The series especially focuses on “the demise of the conflictual model of science and religion.” All of the posts in the series can be found through this link, and my own contribution to the series can be found here. An excerpt, from the essay’s introduction, is below:

Anaxagoras takes the stage early in Aristotle’s Metaphysics as that sober man among drunks who rightly claims that reason is the cause behind all of nature and its beauty. This same Anaxagoras, we are told, “answered a man … asking why one should choose rather to be born than not by saying ‘for the sake of viewing the heavens and the whole order of the universe.’” Reason is needed to cause the beauty of the whole; only mind can make the world a cosmos. Mind is also needed to recognize that we live in a cosmos, as Seth Benardete remarks: “We see heaven and earth, but we do not see their unity, which we call cosmos. ‘Cosmos’ puts a label on an insight about the structure of the whole that is simply not available to sight.” This label, “cosmos,” is rooted in the Greek verb kosmein, meaning both “to arrange” and “to order, rule” as well as “to adorn” (as in “cosmetics”). The aggregate of all that exists is a cosmos because of its adorned order, both arranged and recognized by mind: “And God saw all the things that He had made, and they were very good” (Gen 1:31).